Simply enter your postcode below

Simply enter your details below

« Back to all news

7 of the Best Scrap Metal Artists in the UK

As a country, we generate a staggering amount of rubbish in a year – 100 million tonnes of it, on average. For the most part, that rubbish is sorted and recycled as either new, raw materials or repurposed for energy generation. However, some of the waste we produce is made up of scrap metals, a valuable commodity if you know what to do with it.

Elsewhere we have discussed the value of scrap metal and how it’s priced, but here we’re going to look at something slightly different. Not only can scrap metal be recycled, it can also be turned into a work of art. This month, we’ll be looking at some of the best scrap metal artists in the UK. 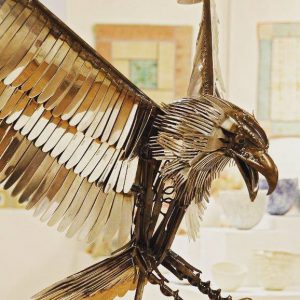 Since he was a young boy, Jason Heppenstall has had a love of creating things, but he’s come a long way since making dams and treehouses in the woods near his childhood home. Nowadays you’re more likely to find Jason at work in his workshop, sculpting an array of models from whatever he has lying around. Nature has a massive influence on his work, and he has had a number of exhibitions throughout West Yorkshire and the wider country.

Using steel to craft a variety of animals both big and small, Harriet Mead focuses on recreating the animal in question unsentimentally to evoke the animal’s strength and structure honestly, as opposed to creating unrealistic, dramatic representations. In the restrained and quiet moments life has to offer, Harriet Mead sees beauty, and shares this with us through her sculptures.

Her work has been on exhibition numerous times, but you can catch her work annually at the Society of Wildlife Artists exhibition at the Mall Galleries and every so often at the Wildlife Art Gallery in Lavenham, Suffolk, among others. 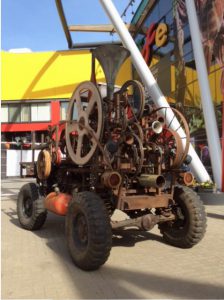 Although he now lives and works in Bristol, Jason Lane was born and bred in Herefordshire, where he attended the Hereford College of Art and Design. He moved on to study in Exeter and Dublin, and now enriches lives throughout the country with his thought-provoking sculptures, both static and mechanical. Most famously his work featured in the closing ceremony of the 2012 Paralympic games: a vehicular sound sculpture to wow the world.

Based in North East Scotland, Helen Denerley has worked tirelessly as a sculptor ever since graduating from Gray’s School of Art in 1977. Her best known works in Scotland include her huge scrap metal giraffes on Leith Walk in Edinburgh. However, she has also had work commissioned in Japan, the US and throughout the UK. Most recently she has created and shipped another scrap metal giraffe to Hong Kong!

A self-taught sculptor based in the North of England, Bob Campbell has been creating striking furniture using salvaged mechanical and industrial parts since the mid 90s. Dubbed ‘Stig’ (a nod to the popular children’s book, ‘Stig of the Dump’), his project is heavily informed by The North’s engineering heritage, as well as its dramatic decline from the 80s onwards. This is made clear through his project’s strong themes of reinvention, and the bleak aesthetic which underpins many of his pieces.

Working entirely from sheet and scrap metal, Diccon Dadey creates beautiful garden art and 3D sculptures which seek to capture the true nature of the animals which they represent. To get to the core of this, Diccon introduces other materials such as salvaged driftwood, offering a softer, more natural contrast to the various metals he works with.

So, above all, Diccon’s art seeks to reconcile the movement and character of animals when observed in their natural habitats, with the stark, man-made materials used to craft them. The results are breathtaking.

Otis has been creating art from scrap metal for 20 years strong. He started by purchasing a MIG welder with a view to experiment with scrap metal, and bring to life some of the ideas he’d quickly formulated. However, what ensued was a prolific period of creativity;  Otis has created hundreds of sculptures from scrap metal, some inspired by day-to-day objects, and some inspired by the metal itself. From cake stands to race cars, the breadth of Otis’ imagination is truly extraordinary.

If you don’t have an artist in you just itching to be let out, not to worry: Hill Metal Recycling can take your cumbersome scrap metal off your hands and put it to good use! We are the leading recycler of all types of scrap metals in the Harlow and Hertfordshire area.

As a DVLA and Environment Agency affiliated company, we have the experience and qualifications necessary to responsibly recycle both ferrous and non-ferrous metals of any amount.

We also offer a 24 hour scrap collection service, including cars, for commercial and some domestic needs. To discuss the best prices you can fetch for your scrap metals, don’t hesitate to get in contact with our friendly team today!

Previous: Environmental Benefits of Recycling Scrap Metal
Next: How Is Scrap Metal Priced?

Can't find what you're looking for?

Browse our resource centre or search for your specific query below

Your metal is in good hands

Ready to get paid for your metal?

Get a quote online

* holidays & bank holidays may differ. Please get in touch